Once again the far, far left politicians in Sacramento, California are working on legislation designed to deconstruct the American culture. This time they will tell large businesses how many hours their employees can work, while still requiring them to pay full-time wages.

The California Democrats in the state legislature have proposed legislation that would mandate a four-day workweek for large companies.

The legislation AB 2932, is sponsored by state Reps. Cristina Garcia and Evan Low. It would require companies with 500 employees or more to change the definition of a workweek from 40 hours to 32 hours.

The bill would mandate that employees receive the same level of compensation for working four eight-hour days as they would for a regular five-day, 40-hour workweek. It would, in effect, raise hourly wages by 25%, while increasing the cost of an hour of overtime even more.

This is the same overtime compensation currently in place, except they kick in at 32 hours.

The legislation would effectively force employers to give workers a raise because it prohibits reduced pay for the fewer hours worked. 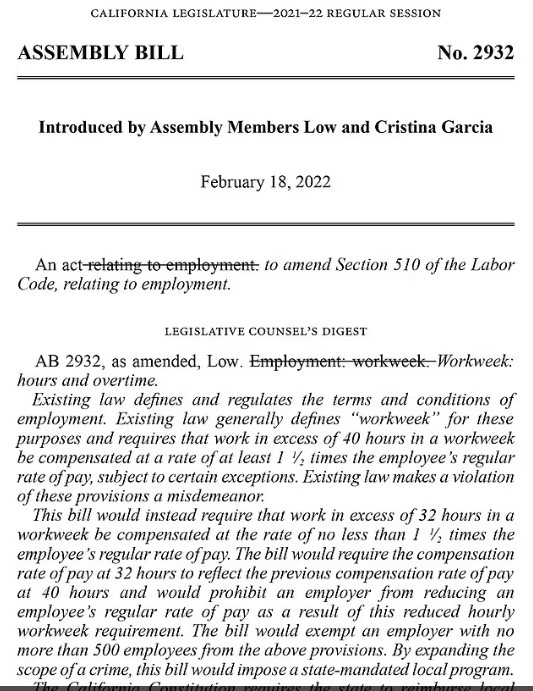 According to the state’s Employment Development Department, more than 2,600 California companies and more than 3.6 million workers would be impacted by the bill.

Of course, there is one group that would be exempt, union workers. Companies that have a collective bargaining agreement with workers — meaning large companies with unionized employees can keep the standard 40-hour workweek.

Garcia, one of the state bill’s sponsors, told the Los Angeles Times that the COVID-19 pandemic has created an opportunity for Americans to rethink what work should look like.

“We’ve had a five-day workweek since the Industrial Revolution,” Garcia said, “but we’ve had a lot of progress in society, and we’ve had a lot of advancements. I think the pandemic right now allows us the opportunity to rethink things, to re-imagine things.”

Democrats claim that a 32-hour workweek would actually increase productivity and profits, citing pilot programs at companies like Kickstarter as evidence the idea could work.

“The fact of the matter is many other companies are already doing this, and other countries too, so I think this is the direction we’re going,” co-sponsor Low said.

The California Chamber of Commerce is firmly opposed to the legislation, calling it a “job killer.”

Ashley Hoffman, a policy advocate for the California Chamber of Commerce, wrote in a letter to Low that the bill “imposes a tremendous cost on employers and includes provisions that are impossible to comply with.”

She estimated that the bill would impose a minimum 10% increase in wages per employee per week, which she said would be unsustainable for many businesses.

“Such a large increase in labor costs will reduce businesses’ ability to hire or create new positions and will therefore limit job growth in California,” Hoffman said. “This is especially true now as businesses are still recovering from the impacts of COVID-19 and resulting rises in supply chain costs.”

If this becomes law, the companies targeted by the legislation would simply reclassify their employees to part-time, working only 30 hours per week.

In the end, only WOKE businesses would happily participate in this pseudo-utopian experiment, with others choosing to reduce some of their employee’s hours, and laying off others, to get around the reduction in production, at the same labor costs.

Another terrible idea from the supermajority in the state legislature who are running the former Golden State quickly into the ground.

This story syndicated with permission from Eric Thompson, Author at Trending Politics

The first step in a socialist takeover is to silence any and all opposition. It is underway.
Read More

The families of both Michael Brown and Breonna Taylor, which are two of the patron saint victims of …
Read More