On March 1st, 2022, the Communist regime in China made it illegal to share religious content online unless you have applied for a special license.

Under the new law, the 5 officially sanctioned religions, Three-Self Church Protestantism, Roman Catholicism, Daoism, Buddhism, and Islam are able to apply for the special license.

According to The Christian Institute, Christians unassociated with the state sanctioned churches are raising the alarm.

Bob Fu, founder of religious freedom group ChinaAid, said: “If you post any religious-related content on the Internet without a license, it’s declared totally illegal.”

He added, that even with a permit, sharing “John 3:16, or the Great Commission of Matthew 28” would be deemed subversive of state power and forbidden.

A Chinese Christian told Open Doors: “This new law now brings the church’s extensive use of the internet for evangelism and spiritual nourishment to a halt.

“Consequently, Christians will be cut off from access to online spiritual resources.”

These laws are the latest push from avowed atheist Xi Jinping’s Communist Party to suppress and control freedom of religion. The Chinese government views Christianity as an existential threat to the Chinese communist rule. Since Christianity is a worldwide view, the CCP is concerned that its citizens should support the Chinese Communist Party and not be influence by foreignors.

However, Christians have good reason to reject the CCP approved churches. In some parts of China, the Bible was rewritten to fit the socialist principles.

Remember when the religious leaders brought a woman caught in adultery. He wrote on the ground and the surrounding people were convicted in their hearts and they left. Jesus told the woman that He didn’t condemn her either and that she should, “Go, and sin no more.”

This part of the Bible was rewritten with Jesus actually participating in stoning the woman found in adultery to death. 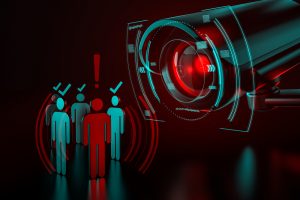 In addition to laws making it illegal for Christians to put their beliefs online, the CCP is quickly developing ways to insert itself into churches. One of the ways they are doing this is by requiring all churches to install facial-recognition CCTV. How this is linked to China’s ‘Social Credit System’ could be left for another whole article. Suffice it to say that if you are deemed to be linked to a belief system that challenges the government, you will be a second class citizen for the rest of your life.

Today the Chinese Communist Party (CCP) introduced a draconian new law to clamp down on any religious activity online.

Any reference to religion on the web is now totally illegal in China, including sharing content online – which means that the unregistered or house church movement has effectively been driven offline.

What’s particularly tragic is that so many of these churches had been meeting through the internet since the Covid-19 pandemic. Now, if they are discovered meeting online, they face being accused of spreading harmful propaganda.

The U.S. imposed visa restrictions on Chinese officials for their involvement in the crackdowns on freedom of speech and religion.

The ANI had more information on the visa restrictions.

The visa restrictions have been imposed on Chinese officials who are believed to be responsible for, or complicit in, policies or actions aimed at repressing religious and spiritual practitioners, members of ethnic minority groups, dissidents, human rights defenders, journalists, labor organizers, civil society organizers, and peaceful protestors in China and beyond, including within the US, a statement by the US State Department said.

This story syndicated with permission from My Patriot Post

The “People’s Sheriff” goes into depth on effective policing, why the police need more in depth training in …
Read More