Following the fraud-ridden 2020 elections, MyPillow CEO Mike Lindell stepped out from being one the most popular marketing personalities on television, into the lion’s den of the far left cancel culture.

Mr. Lindell was one of the first to speak out about the voting irregularities and early morning mystery ballot drops. Lindell using his national reach told the media that an audit of the elections in several swings states needed to be done before the January 6th electoral college counting took place.

As a result of Mike speaking out, the national media zeroed in on Lindell leading the “cancel culture” to target MYPillow and Lindell for destruction. Several national box stores acquiesced to the pressure, removing MyPillow products from their stores, costing the company millions of dollars in revenue.

In addition, radical reporters have tried to trip up Mike during interviews and continue to troll him hoping to catch him off guard, in order to get a story to go viral.

Well, sometimes those trolling get so lost in their pursuits that they become the targets for being tolled themselves, MyPillow CEO Lindell just had fun with one of them.

For the past few days, Mike has been trying to get 10,000 free pillows across the Canadian borders and into the hands of many of the truckers participating in the Freedom Convoy, but his shipments have been stopped at the border by the draconian government.

The Daily Beast reached out to him for comment but instead of going mano a mano with them, Lindell took an opportunity to turn the tables by giving them a story to report, which was a fabrication, yet they bit on it anyway.

It was so over-the-top outrageous that it was clearly satire, but they printed it anyway: 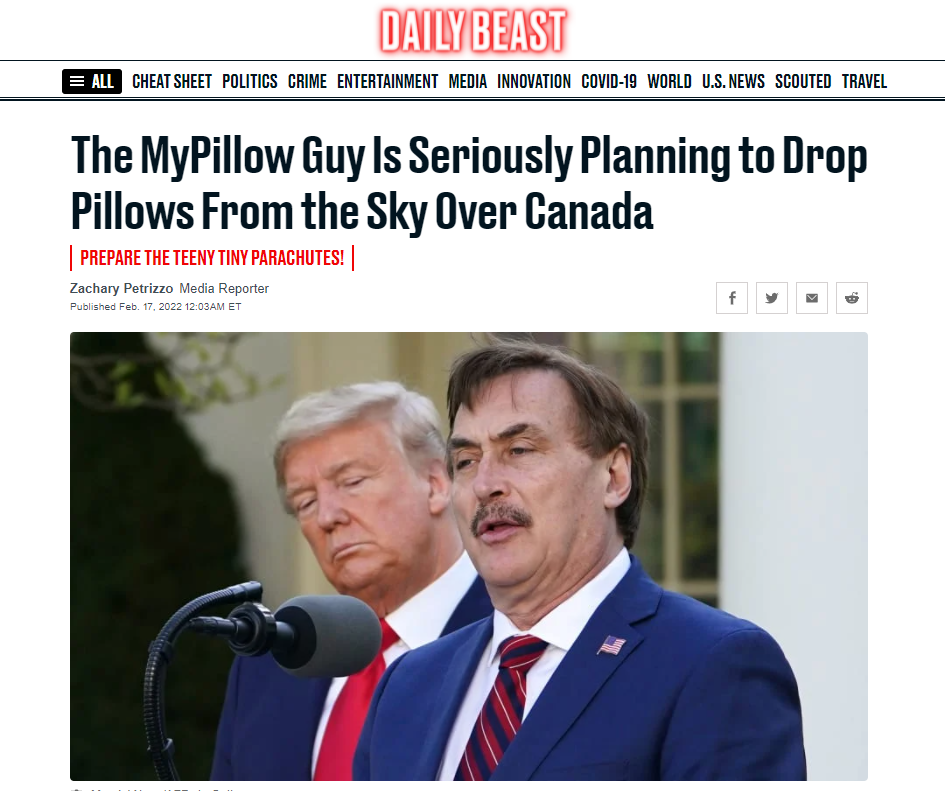 After his initial Tuesday shipment of MyPillow products was denied entry into Canada, Mike Lindell now has a backup plan to get free pillows to Canadian truckers: drop them from the sky via a helicopter. The pillow maven told The Daily Beast late Wednesday night that he intends to drop his pillows into Canada from a helicopter “with little parachutes” attached. “We need to get the MyPillows to the people!” he continued. The 2020 election dead-ender further made it a point to ensure The Daily Beast noted in this report that the pillows will have “little parachutes,” adding, “make sure you put that part in, or it could be dangerous.” Asked where exactly he intended to drop the pillows, he said, “I can not give the location out, and it is no joke! I just confirmed with them [the helicopter company], and yes, this is the plan. We have the helicopter confirmed, but we are moving the time up to 11 am.” The Daily Beast could not reach the Canada Border Services Agency for comment late Wednesday night.

In line with the huge amount of fake news, the left has been reporting, such as the Russian Hoax, etc, the democrats and never Trumpers who have believed everything spoon-fed to them, refuse to hold the journalists accountable, even after getting exposed for their lies.

They WANT to believe that Lindell would attach little parachutes to his pillows to get them to the truckers. Common sense goes out the door when leftists get a hold of a nugget they can rail against regardless of how clearly satirical it was.

The more outrageous the statement, the more likely it is that the left will believe it, especially about conservatives. That’s how The Big Lie works, especially on the gullible.

This story syndicated with permission from Eric Thompson Show

Ireland fought for its freedom for decades, if not centuries. Year after year, IRA terrorists (or freedom fighters, …
Read More

The Food and Drug Administration has now granted full approval to the Pfizer/BioNTech coronavirus vaccine, which up until …
Read More

Rep. Claudia Tenney told Newsmax on Wednesday that she’s never seen the “amount of anger and anguish” from …
Read More