In a time when Los Angeles County is experiencing skyrocketing crime, homelessness, and brazen theft, their county supervisors have been considering firing thousands of highly trained peace officers, for not taking the disputed COVID jabs.

Yes even though homicides in Los Angeles County have increased 94% over the last two years, the edicts coming down from their politicians must be complied with or county employees could face termination.

Their plans to fire the huge number of officers, when The Los Angeles Police Department has 296 empty officer positions and almost 500 fewer officers on duty than it did this time last year, will only exasperate the county’s problems.

The shortage is due to budget cuts, challenges of the pandemic, and massive retirements following the lack of support during and following the 2020 rioting in response to the death of George Floyd while in police custody.

BLM and ANTIFA took advantage of the situation, sending thousands of their activists to the streets to call for reform while demanding the defunding of police departments. Progressive city councils in the U.S., including Minneapolis, MN, have significantly defunded their police while trying to move to community-based alternatives.

But in the sheriff’s department, less than 60% of employees were in compliance with the vaccine mandate.

The motion directs county attorneys to work with the CEO and personnel director to develop proposed amendments to county Civil Service rules, giving the personnel director “overriding authority to discipline the employees of any county department for noncompliance with the county’s policy or directives related to the policy.” 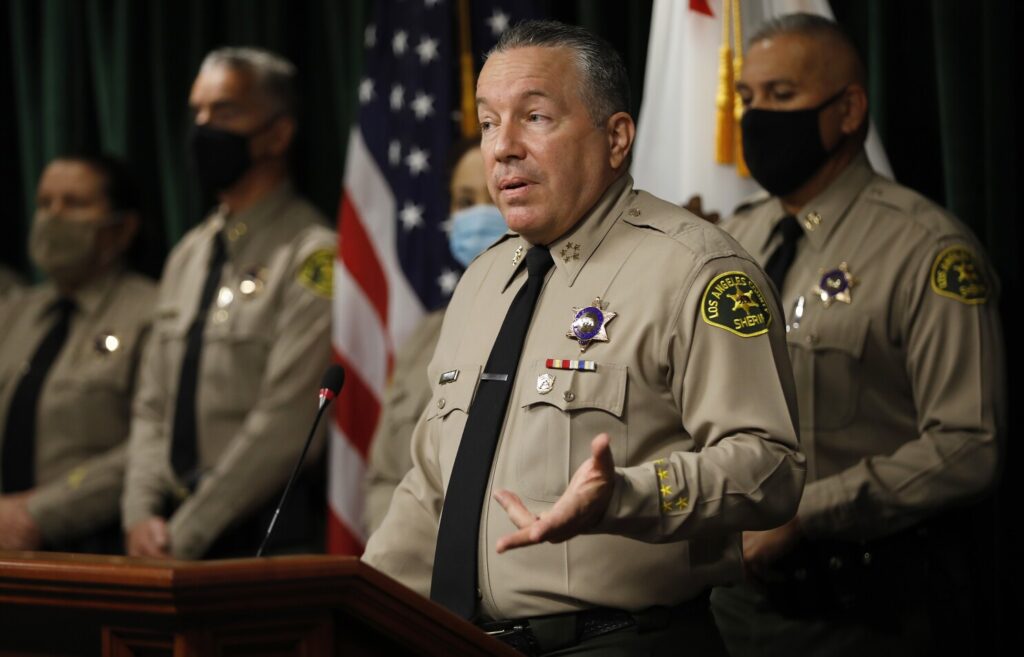 Villanueva issued a statement in protest against the board’s decision, which comes during a crime wave in the county:

Today the Board of Supervisors followed through on their threat and voted 4-0 (1 abstention) to form a suicide pact and start the process to fire 4,000 deputies for not being vaccinated. Showing deliberate indifference to the obvious impact on public safety, the Board hid behind an alleged threat to public safety they couldn’t back up with data. Tellingly, the Board’s own County Counsel (Rodrigo Castro-Silva) couldn’t offer even a basic legal opinion on the legality of the Board’s motion, or the obvious legal challenges they will face.

The Board, who ignored the comments made by thousands of their constituents today during their meeting, is now seeking to fire the very same personnel who were forced to work in person, exposing themselves to the COVID-19 virus when there was no vaccine, while the Supervisors and most of the workforce were telecommuting from the comfort and safety of their own homes. Supervisor Kuehl falsely asserted in her motion that LASD employees represented 74% of infected County employees, ignoring the simple fact most infections were during pre-vaccine availability.

It is important to remember Department personnel who chose not to vaccinate are required to submit to weekly COVID testing and have committed no administrative offense.

This is nothing more than another politically motivated stunt by the Board, which has no bearing on public health but will definitely harm public safety.

The proposal will come before the Board of Supervisors on March 15 for a final vote.

The National Republican Congressional Committee (NRCC) issued a statement in response to the Board vote:

Homicides in Los Angeles County have increased 94% over the last two years, but that didn’t stop the Los Angeles Board of Supervisors from terminating 4,000 sheriff deputies last night.

Or will they stay silent and do nothing as crime continues to rise across Southern California?

This story syndicated with permission from Eric Thompson – Trending Politics

Rep. Dan Crenshaw reacted to the news that President Joe Biden and his administration was pleading with OPED …
Read More

So…let’s defund the police, but not say it, so people get on board who would otherwise be smart …
Read More